These accounts are from a publication that was printed in 1936. The aim was to print the memories of Beckenham's oldest residents.

The Telegraph Clerk who crawled under wreckage.

Mr Walter Mathew, of 109 Mackenzie Road, Beckenham tells his personal account of the railway crash in 1866 in which as a telegraph clerk he crawled under the wreckage.

I was born on January 10th, 1850, at Copers Cope House which still stands at the corner of Southend Road and Copers Cope Road, and have lived in Beckenham all the time exept while at boarding school at Bromley, and a year or two at Keston. My father leased the farm from John Cator, and the farm lands ran along the north west side of Southend Road to Stumps Wood Hill, and at the back joined Kent House Farm and Sydenham.

Opposite Copers Cope Farm was Foxgrove Farm extending from the Churchyard to Beckenham Place. When the land was wanted by the Railway Company, my father Michael Mathew, took Stone Farm in Wickham Road opposite Hayes Lane, where there is now a garage.

Sir John Lubbock, of High Elms, Farnborough, used to pass daily on his way to Beckenham Station for London, in an open carrage with two horses, a position riding on one. Sir John returned at 5 p.m, and was so regular that you could set your clock by him.

Beckenham railway Station was opened in 1887 and a very pretty looking station it was; it had a glass roof and the woodwork was painted white, the iron work in red and the nuts and bolts were picked out in blue.

On January 10th 1866 there was a railway accident at Blakeney Road Bridge. There had been a very heavy snowstorm, the telegraph wires were broken down, and owing to the melting of the snow the river at Blakeney Road was very much swollen and the foundations of the bridge which spanned the river gave way. 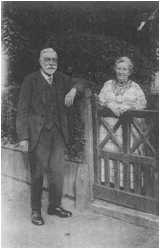 At 1am a goods train was due to arrive. Baxter, the signalman at Beckenham Junction, could get no communication of trains coming, owing to the breakdown of the telegraph wires, so he was on the look out and when he saw the train approaching, pulled off the signal and watched for it to come on, but suddenly he saw the head lights disappear and heard the crash.
The engine driver was thrown onto the bank and found himself sitting facing London, unhurt. Maxted, the fireman, was killed, buried beneath the wreckage and it was four days before it was possible to extricate his body..

Another even was the fire at the Crystal Palace. It occurred on a Sunday afternoon. Frank Moor, the stationmaster's son suggested we should go over, so we went over hedges and ditches. The transept was all ablaze, the glass was smashed and this saved the fire extending, leaving the gap which exists by the North Tower.

An amusing incident occurred at Stone Farm. Fuller, the undertaker, was told that my father was dead. He came up to Stone Farm and when he opened the gates the first person he saw was my father, who said, " Hullo Fuller, what do you want?" He replied, " I heard you were dead, and I have come to measure you for a coffin."

These accounts are from a publication that was printed in 1936. The aim was to print the memories of Beckenham’s oldest residents.

MRS ELIZABETH ANN TOWN TELLS THE TALE OF THE POLICE STATION BEING USED AS A POST OFFICE.

Mrs Elizabeth Ann Town of 99, Churchfields Road, Beckenham, who has lived in Beckenham for 89years, has many interesting details to recall in the following contribution:

I was born in a cottage in Fullers Row which was just past the Croydon Road Recreation Ground.

When I was a child I remember playing round the old prison cage which stood with the stocks and pound in Beckenham Village, opposite the place where the Greyhound Hotel now Stands.

Beckenham High Street, as it is now know, was then called Penge Road. Another part very little known was a footpath leading from the Alms Houses in Bromley Road to Foxgrove Farm, in Foxgrove Road, which was then only a narrow road leading to the farm. This path went through some fields where Albermarle Road and The Avenue are now. Just past the Alms Houses in the Bromley Road was a spring.

On the corner of what is now Sydney Road stood an old cottage know as Sydney Cottage which has a horse pond in front.
Churchfields Road was then a narrow lane just wide enough for a horse and van to pass through. At the Lych Gate which still stands at the entrance to the Parish Church was a stool on which the coffins were rested.

Two more connections with old Beckenham were to toll gates, one which stood opposite the Alexandra School and the other in Long Lane, Elmers End. A well know baker in Beckenham (Levens) had a very busy time on Sundays baking the dinners of residents at the cost of two pence a dish.

It was the custom at that time for the mail to be left at the police station as there was no post office in the place. One very server winter night, the mail cart pulled up at the station as usual and the police on duty waited for the bas to be brought in, but none coming, they went to see the reason why and found the driver frozen to death, so severe was the frost.

An early recollection was before the line was built through Beckenham junction. An old farm house stood opposite the corner of Foxgrove Road from which an old lane led to the fields across which a footpath led to Kent House Lane. These fields were know as Rushey Meadows.