Actor JOHN BENETT, born Beckenham, May 1928. Often cast as a villain, he had many roles on television including Porridge, Survivors, The Avengers, Bergerac and four episodes of The Saint [1]. He guest-starred in two Doctor Who serials, as General Finch in Invasion of the Dinosaurs (1974) and as the Chinese magician Li H'sen Chang in The Talons of Weng-Chiang (1977). He is also well remembered as Philip Bosinney in the BBC's 1967 adaptation of The Forsyte Saga, but also appeared in over three hundred TV productions including God's Architect, Blake's 7, I, Claudius, Rome, Rosemary & Thyme, Saracen, Honey Lane, Special Branch, Softly, Softly, Mulberry, Tales of the Unexpected and Anna Karenina.

He starred in many West End musicals including On Your Toes (Palace), Marilyn (Adelphi), The Sound of Music (Apollo Victoria), The King and I (London Palladium), The Baker's Wife (Phoenix) and was nominated for an Olivier Award for Best Supporting Performance in a Musical for his performance as Louis Epstein in Jolson The Musical (Victoria Palace and Royal Alexandra Theatre, Toronto).

His last stage role was as Conrad in Gates of Gold by Frank McGuinness with William Gaunt at the Finborough Theatre, London, in December 2004. In radio, he had been a member of the BBC Drama Repertory Company, and his broadcast parts included roles in programmes that ranged from Shakespeare to Paul Temple. 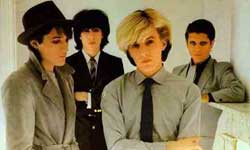 DAVID SYLVAN was born in 1958 in Beckenham, Kent, England, but spent most of his childhood and young adulthood in London. He gravitated toward a career in music early in life, and at age 16, joined a band at school in Catford, South London.

As a founding member of the group Japan, a band that critics define as one of the most underrated and extraordinary bands of the late 1970s and early 1980s, Sylvian served as the group's lyricist, composer, and vocalist. Japan's other members included bassist and bass clarinetist Mick Karn (also known as Anthony Michaelides), synthesist Richard Barbieri, and drummer Steve Jansen (Sylvian's brother).

While Japan's first two albums resembled the glam-rock style and image found with many pop groups of the late 1970s, their music progressively moved to a unique style that included both Eastern and orchestral influences, as well as early electronica. Consequently, Japan rose in popularity with singles such as "The Art of Parties" and "Ghost" (from the album Tin Drum), which reached number five on the British charts in 1982.

JAMES COSSINS, born 4 December 1933 in Beckenham, Kent, he became widely recognised as the abrupt, bewildered Mr. Walt in the Fawlty Towers episode "The Hotel Inspectors". He played a wide range of characters throughout his colourful and extensive career on television and stage.

His film credits include The Anniversary (1968), Gandhi (1982), and The Man with the Golden Gun (1974). On the small screen he appeared as a guest in a variety of show, including Some Mothers Do 'Ave 'Em, Minder, Bergerac, The Sweeney, All Creatures Great and Small, Citizen Smith, Just William, The Good Life, Z-Cars, and as the regular character Bruce Westrop (in 1974) in Emmerdale Farm. He also appeared in the first series of All in Good Faith in 1985. Cossins died at a young age of 63 in 1997.